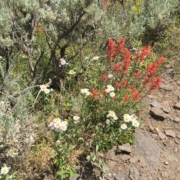 Drew Dehoff, ICWP Board Chair, called the meeting to order at 11:03 a.m. Central time.  The Board summary from the January 6, 2022 call was approved.  Amy Shallcross made the motion to approve the summary and Mabel Jones seconded the motion.  The meeting summary was approved by unanimous voice vote.

Brian Atkins reviewed the Treasurer’s Report and reported total assets were $168,573.64 after expenses as of January 31, 2022.  The treasurer’s report is attached.

The Executive Director’s Report dated January 31, 2022 is attached and was distributed the full Board.  ICWP Executive Director Sue Lowry reported that she had a recent discussion with Martin Doyle, Nicholas Institute at Duke University, about the Institute hosting future Roundtable meetings inviting state and federal water resource managers to attend to discuss new initiatives in water management.

Sue Lowry also reported that the Western States Water Council (WSWC) has invited ICWP to co-sponsor a data sharing conference that WSWC plans to host in Salt Lake City in June 2022.  The WSWC hosted a similar conference in 2019.

Legislation and Policy – last met on Jan. 27; next meeting on March 2

Water Data and Science – last met on Feb. 1; next meeting to be scheduled

Sue Lowry reported that 8 ICWP intern applications had been received. Sue, Heidi Moltz, and Mabel Jones had reviewed the application and narrowed the list of interns down to three.  Study topics will be developed soon.