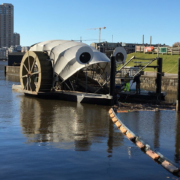 Call to order – Heidi Moltz called the meeting to order at 8:30 a.m. Eastern.  No additions to the draft agenda were proposed.  These minutes reflect the significant issues reviewed and resolutions adopted.

Southeastern U.S. Water Conference.  Ryan reported that ICWP had been asked by the University of Georgia’s River Basin Center to mount the third southeastern U.S. water conference.  A large transboundary session is planned during the conference on October 24 in Phenix City, AL.  ICPRB and SRBC will be represented, and Dean Edson, Director of Nebraska’s Natural Resource Districts, will speak about groundwater management.  Ryan noted that it is part of the job of the Executive Director to look for opportunities to collaborate and to promote membership in ICWP.  The University of Alabama’s Water Policy Center joined ICWP last year as a result of this type of outreach.

New opportunity for Ryan.  While promoting ICWP membership to the State of Indiana, Ryan was recruited to head the Indiana Department of Natural Resources Division of Water.  He has accepted the job and is due to start on October 16. Ryan will continue as ICWP’s Executive Director to fulfill his previous ICWP commitments through October 31 and will support the leadership transition on a voluntary basis after that date. Ryan promised to bring Indiana in as a member.  He thanked the ICWP Directors and members for the opportunity he had been given to lead the organization.  He said it had been a terrific experience and had allowed his wife to make an important career move that was beneficial to the family.

Washington, D.C. Roundtable.  Ryan said he hoped to see everyone at the D.C. Roundtable in March.  The event will be co-sponsored by the Western States Water Council (WSWC) and will run from March 13thto 16th, 2018 at the Crystal Gateway Marriott Hotel.  The format is expected to be similar to previous years, with a day focused on water resources planning, a day for speakers from the current administration and the hill, and a day devoted to meetings at agency and hill offices.  Ryan noted that last year’s Roundtable had 80 attendees.