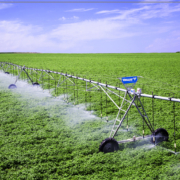 This talk will be similar to the talk Molly gave at the OKC annual meeting, with some updates.  The SECURE Water Act, signed in 2009, provided the basis for the Water Use Data and Research Program.  The State grant program was authorized for $12.5M; each state eligible for up to $250K. Grant program has received $1.5M annually since 2015.  $26K non-competitive grants were initially provided to each state to develop their Workplan and a Workplan is necessary for consideration for additional grants. 45 states have now received the $26K and completed a Workplan.  18 states received competitive grants in FY2016; 15 states in FY2017; for FY2018 many states have gone to 2-year projects—7 states due to short RFP timeframe.

Many of the current awards are working on data quality and robustness.  Several states have consumptive use or irrigation use components. FY19 awards awaiting Secretarial approval.  Program announcement is ready and webinars will be held once cleared.

Guidelines on Water Use data for the USGS 5-year Water Use reports—3 tiers of baseline goals by type of use (Public Supply, Irrigation, Thermoelectric, etc.)

Workplan summaries requested information on what Tier each state was at by use category.

Discussion—what doing to collect irrigation use?; how is QA/QC accomplished?; what are statutory requirements by state for submitting water use data?  These are questions related to water use previously raised by the committee.

Are the work plans public?  Molly will verify.  The contracts are clear that the data need to be public, but not as clear on the report itself.  Molly will contact the states to get permission to post the reports to the USGS WUDR website.

If some of the Grant funds could be used within the USGS, they would have the resources to do more of the compilation work—Kim Schaffer from USGS Ohio WSC is working on WUDR part-time.

Amy and Sue will work on a letter to USGS asking for the compilation of data from the Workplans submitted by 45 states.

Delaware River basin stakeholder meeting scheduled for late March (needed to be re-scheduled due to the government shut-down).  Support for NextGen is included in stakeholder letter that ICWP is developing to deliver to Congress at the Washington Roundtable.  Monty—add that Next Gen is an opportunity to better incorporate other high-quality data that are collected by non-USGS parties. Getting mixed platforms to better integrate is another goal.  Ask Chad Wagner to touch on these topics during his talk at the Roundtable.

Amy asked the committee to give their highest priority issue for determining the next topic to be addressed in a webinar—Internet of Water was suggested.  NIDIS and keeping abreast of the WSWC Water Information Conference as dates are set were also mentioned.