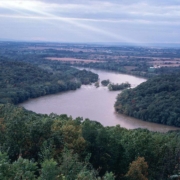 The Organics Detection System is a premier water quality monitoring system that detects volatile organic chemicals in the Ohio River and helps protect the drinking water quality for more than 5 million people every day. Recent congressionally directed funding helped support a needed upgrade to the system, improving its analytical capability and upgrading system communications. These upgrades have already proved valuable in protecting Ohio River drinking water utilities, detecting and tracking the spill of 4 Methylcyclohexane methanol (4-MCHM) from a chemical storage facility in Charleston, WV, that occurred in January, 2014. Once in the Ohio, it threatened the water resource relied upon by more than 1.5 million Ohio River basin residents. Because of the ODS, no Ohio River utilities were compromised by the MCHM.