The Annual Meeting started off with a fantastic, up-close view of the Mobile harbor and surrounding delta from the comport of the Wild Native Tours pontoon boat.  Thirty-four members attended and were treated to in-depth information from the Wild Native tour guides on nautical, boatin 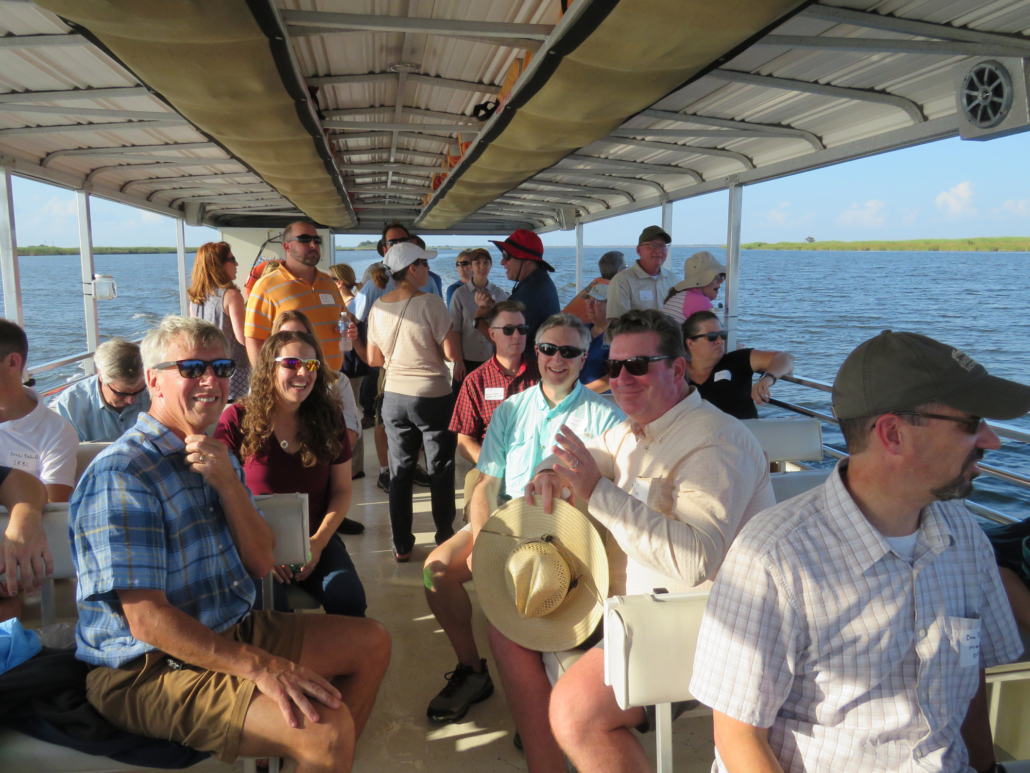 g, biological, ecological facts for the Mobile Bay. Brian Atkins promised no hurricanes and he came through with flying colors as the weather could not have been more perfect for a 3-hour tour on the water.

Brian Atkins, ICWP Chair welcomed the ICWP members to Alabama.  Col. Joly, USACE Mobile District, was not able to attend and Curtis Flakes did a wonderful job of setting the tone for our meeting.  Curtis has worked with a number of programs important to ICWP and gave an update.  He emphasized the need for partnerships.  The biodiversity of the Mobile Bay is of worldwide importance and keeping its integrity while also supporting economic development is a goal of the USACE.  Mobile Harbor improvements to deepen the port to 50 feet is needed to stay competitive with world shipping via the Panama Canal.  The ability to make these upgrades needs  strong partnerships and leveraging to be successful.

Dr. John Christy, Alabama State Climatologist, focus on recent flash drought conditions in the Southeast.  As this area receives high rainfall, permeable soils are desirable, but during low rainfall periods, the soils dry out quickly and crop damage occurs within weeks.  Dr. Christy has developed a crop stress model and he would like to see the federal drought products respond more quickly to changing agricultural conditions. Patrick Guinan, MO State Climatologist and Jennifer Hoggatt, presented a case study of the drought that impacted Missouri from the fall of 2017 and carrying into 2018.  A triple whammy of first a dry fall which led to Red Flag warnings in December (these are usually not seen until February or March).  Second was the April being the 2nd coldest of record, followed by May of 2018 being the hottest of record.  This flip from a cold April to a hot May led grass to grow only stem and little nutritional value.  Patrick noted the usefulness of the Drought Impacts Reporter.  Elizabeth Ossowski, NIDIS; NIDIS and National Drought Forum Update.  Elizabeth highlighted topics from the recent Forum held in July, 2019.  NIDIS is aware that the single product of the US Drought Monitor can’t do all needs well. Topics discussed at the Forum included:  Drought and Public Health Linkages; Drought FY20 grant Program; expanding the National Soil Moisture Network; NIDIS plans a March 2020 re-launched website.

Meeting participants were asked to break into 3 groups to discuss the following questions related to the update of the Interstate Solutions for the New Millennium Report: 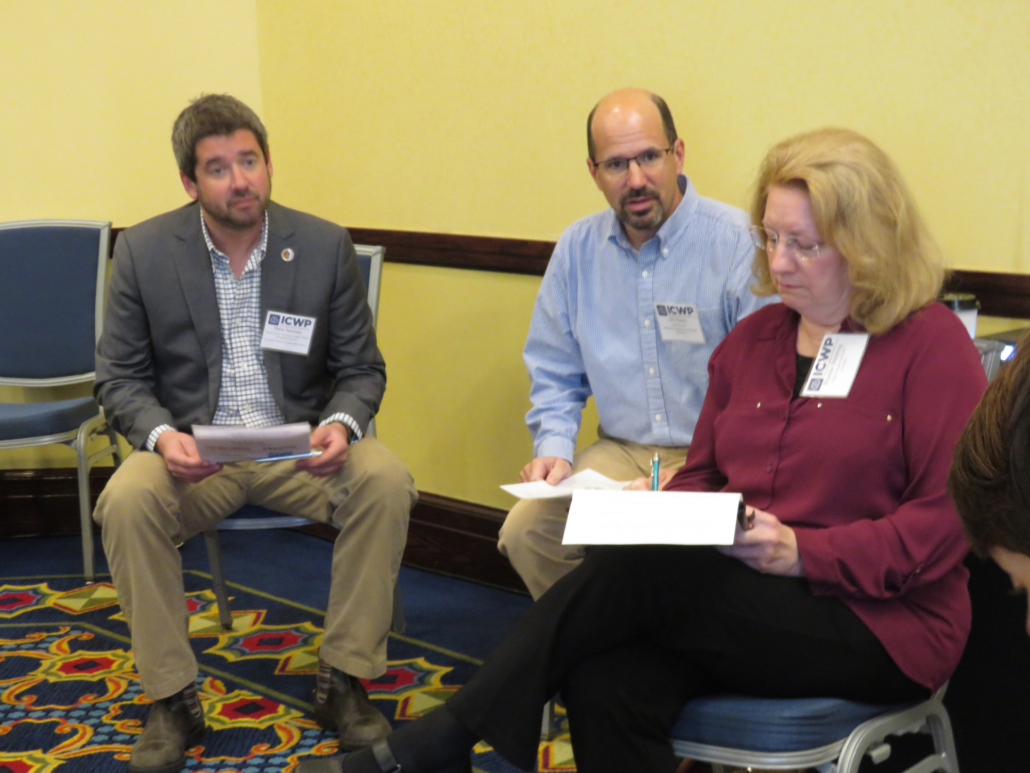 Beverly Hayes, USACE, kicked off this second panel with an update of the Planning Assistance to States and Floodplain Management Services Programs, stating that these programs are meant to work with partners to accomplish the needs of the partners.  Beverly described that the partners’ cost share for Water Resources Planning can be made through in-kind services, but for Technical Assistance work, the match must be in dollars. Congress wants USACE to take a different approach to water resources, to be more holistic and eco-system based. Drew Dehoff, SRBC Executive Director, provided an Interstate River Basin Commission’s perspective on the application of PAS funds.  He noted that when JoEllen Darcy was ASA, she suggested PAS funding as a partial solution for the lack of federal allocation dollars to the interstate commissions. Becky Allenbach, EPA Region 4, Water Protection Division updated the group on a number of EPA initiatives, including the Drought Resiliency Partnership Workplan; the Draft water re-use management plan out for comment; WIFIA;  Nutrient trading; Mississippi Hypoxia Task Force; and WOTUS.  Mindi Dalton, USGS, Program Coordinator, Water Use and Availability Science Program update.  ICWP was particularly interested in the Integrated Water Availability Assessments and the indicators being chosen by USGS.  She welcomed any suggestions for other applicable indicators. The Water Use Data and Research grants for FY19 had just been selected. In the FY20 budget, the National Water Quality Program will get divided into the observing systems program and the Water Resources Availability program.

Andrea Collier and Miguel Wong; Barr Engineering, presented an overview of the Fargo-Moorhead Flood Project. The Fargo-Moorhead area  experienced several back to back flood years 2009-2012.  The area has a population of about 200,000 people and the project will result in 70 sq mi of flood protection.  Vicki Lukas, USGS, 3DEP/LIDAR update;  Vicki started her presentation thanking ICWP for their support of the 3DEP efforts.  She showed the timeline for getting the balance of the continental US flo 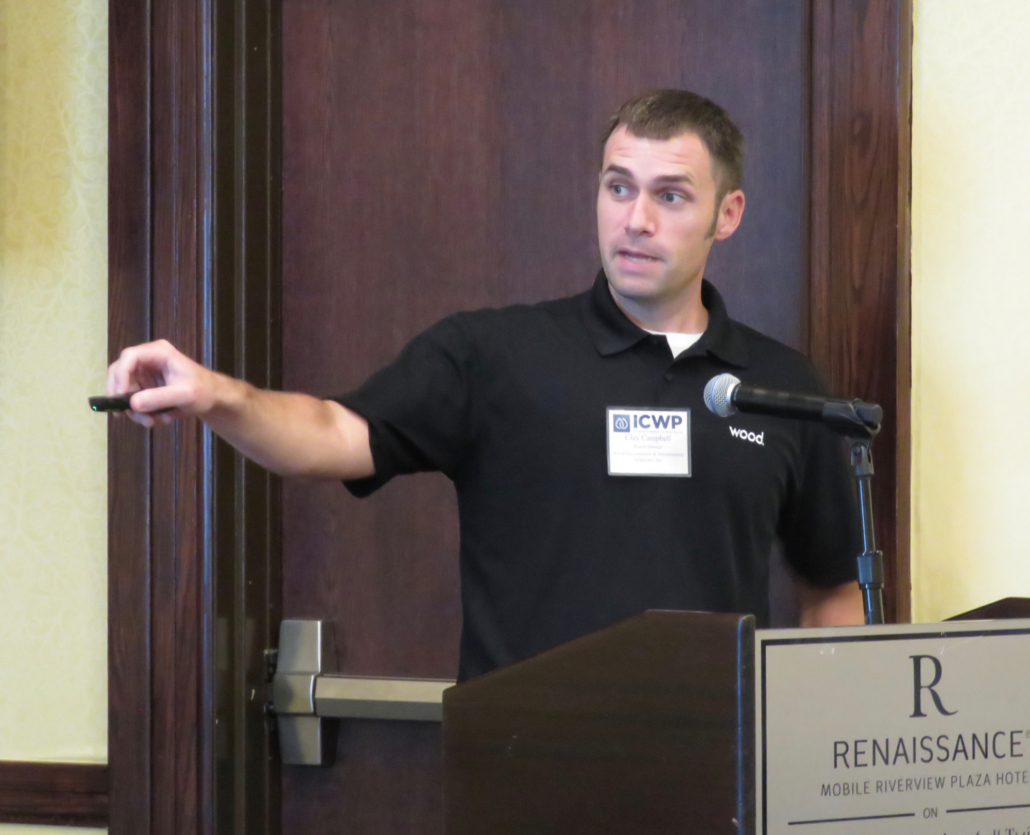 wn by 2023.  The 3D terrain model will be incorporated into the National Water Model.  Many ICWP members want to utilize the NHDPlus HR capabilities.  Jim Schneider, Olsson—Application of GET;  Jim described that several, already developed groundwater models are now being brought into the GET platform by Olsson.  The ability to run “what ifs” is greatly enhanced. He gave examples in the Mid-Atlantic, Utah-Snake River, Nevada and California.  Clay Campbell, Wood PLC; These Coastal Flood Mapping studies for Mobile and Baldwin counties were started project in FY08.  FEMA mapping used to be country wide and then risk maps transitioned to watershed.  Clay described the ways surge and wave elevations are different as well as differences in surge modeling and overland wave modeling.  Casie Pritchard, Alabama OWR, Alabama Floodplain Mapping Program; Cassie described the RiskMAP–Risk Mapping, Assessment and Planning (MAP)—products and how they enhance beyond the traditional Flood Insurance Rate program.  She gave specific examples from her work in Alabama. 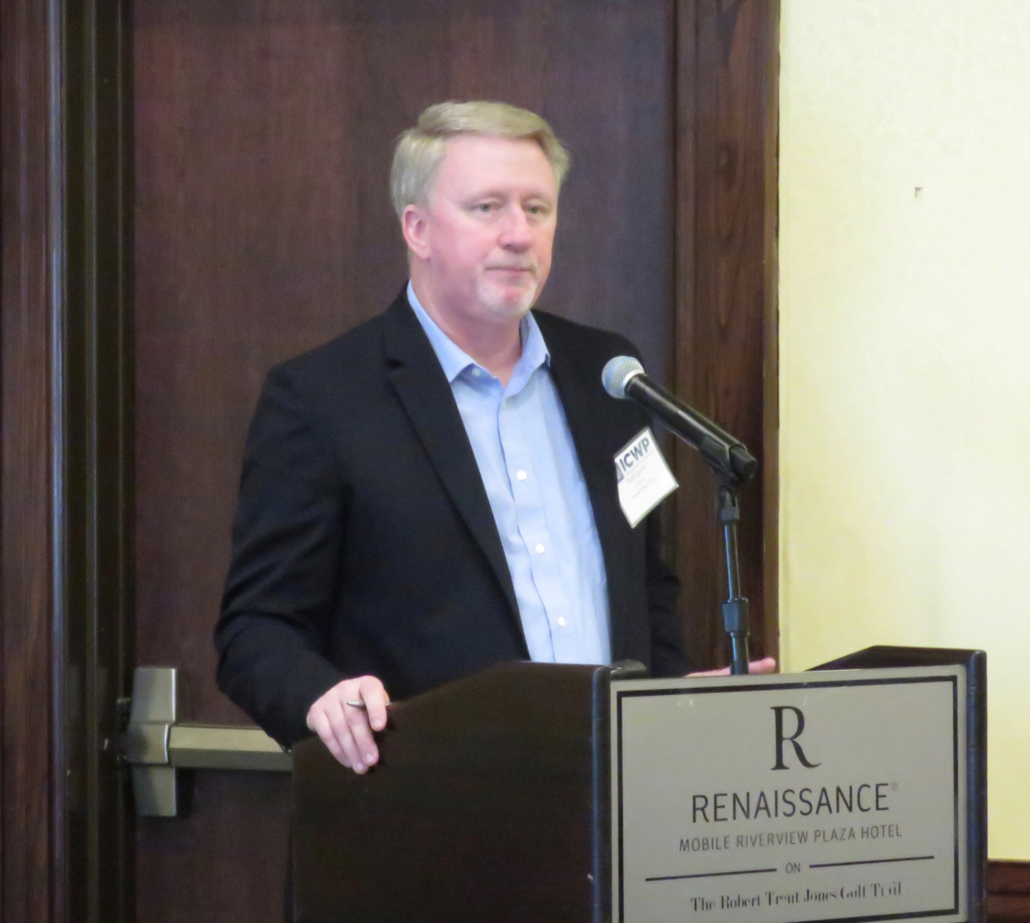 supports all 3 objectives and is headed by Lauren Leuke-IWR lives in Denver. Earl Lewis, KWO and Chair NWSA.  Earl briefed on the evolution of the USACE Water Supply Rule resulting mining from actions taking on Missouri River operations in No. Dakota and Lake Lanier in Georgia.  Sec. 6 1944 FCA gave USACE ability to sell surplus water and the other main applicable federal law is the Water Supply Act of 1958

Todd Hamill, Southeast River Forecast Center-Atlanta described that the NWS offices work in concert with the Forecast Centers.  Todd showed details from Hurricane Florence, a slow moving storm event which dropped enormous rainfall on N. Carolina.  He contrasted with Hurricane Michael which moved much faster, but had damaging winds.  Larry Weber, University of Iowa Flood Center, pointed out that the University of Iowa houses the longest operating hydraulics lab which will be 100 years in 2020.  In 2009, the Iowa Flood Center began after significant 2008 flooding in Iowa.  The current wet period started Labor Day of last year (2018).  The March 2019 bomb cyclone hit and re-froze soils with rain on snow event.  Jeff Graschel, NOAA Lower Mississippi River Forecast Center described the 2018-19 flooding.  Flooding in May, 2019 in KS and OK led to record flows from the Arkansas River, adding to the already high flows in the  lower Mississippi River. Overall flooding magnitude not as high as 2011, but duration much longer than anything else in recorded history. 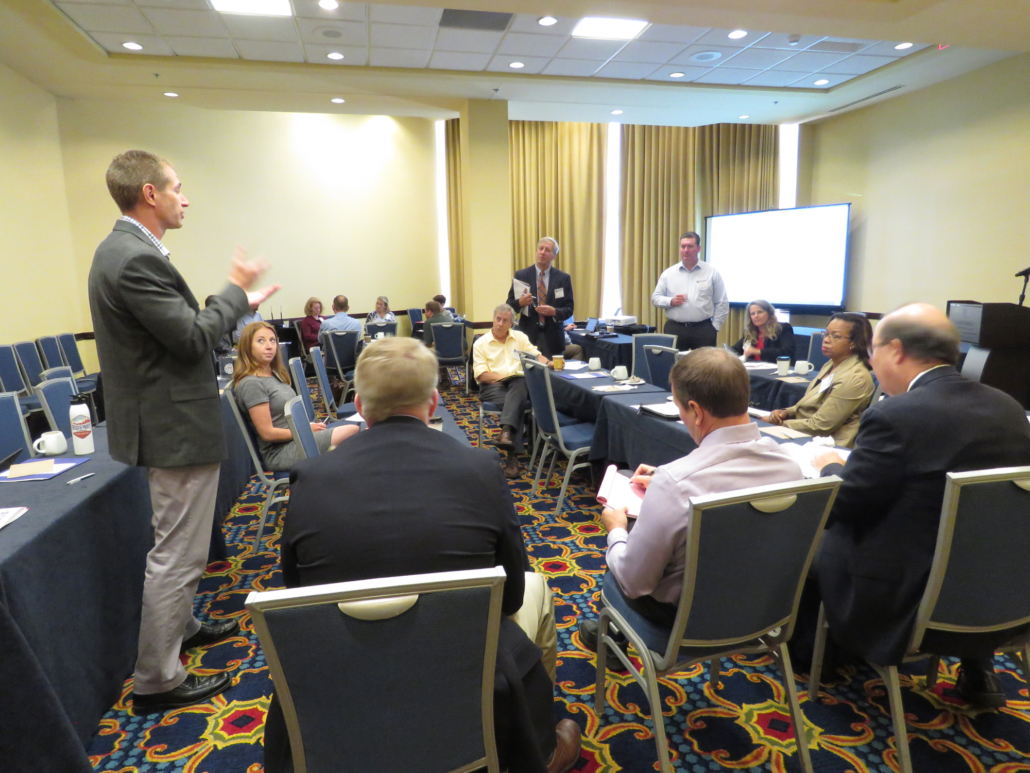 updated the latest developments with the Next Generation Water Observation System (NGWOS) which has a goal of selecting and placing additional monitoring equipment and analysis in 10 medium sized watersheds across the US.  The Delaware River basin was the first pilot, started a year ago.  The next basin will be in the West and a selection design method was used to rank basins across the US.  (Post meeting note, the upper Colorado/Gunnison River basin has been selected as the 2nd NGWOS basin).  Rodney Knight, USGS; Streamflow Estimation Modeling in Southeastern U.S.–Rodney is the Associate Director of the Lower Mississippi WSC and his personal research has focused on determine what gulf coast streams have been most altered.  He utilized trends in streamflow, on-line mapping applications and multi-output neural networks (machine learning) to analyze a portion of the gulf coast and compare methods for a disturbance index that can be applied to larger regions. Peter Colohan, Internet of Water outlined his new position housed at Duke University.  The main challenge to be tackled by the IoW is managing the data we h 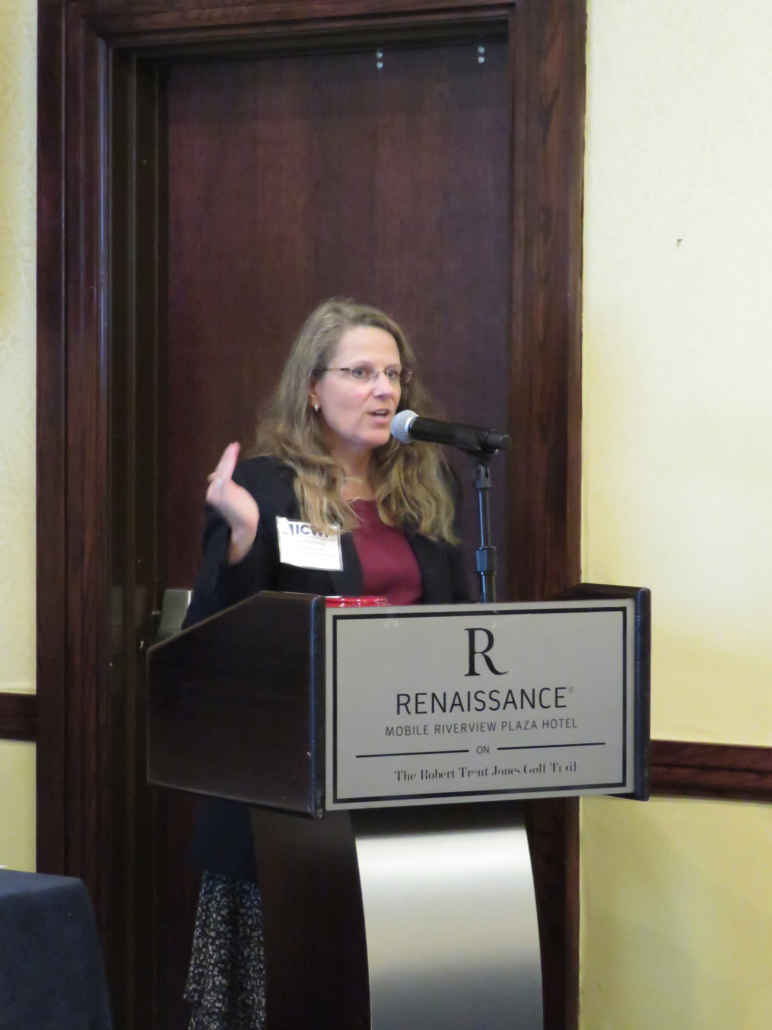 ave.  The goal of open water data management by:  Connecting, Opening, Discovering and Empowering data via hubs to connect producers and users of all types of water data.

Newly elected Chair Amy Shallcross asked everyone to fill out the Priorities Survey by October 31 and encouraged members to have staff participate in the committees. She wished everyone safe travels home and we look forward to seeing everyone at the Washington DC Roundtable in late March, 2020. 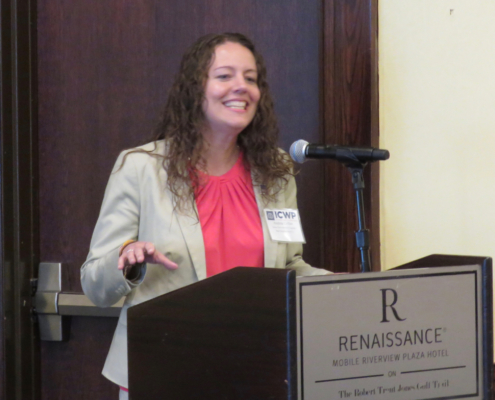 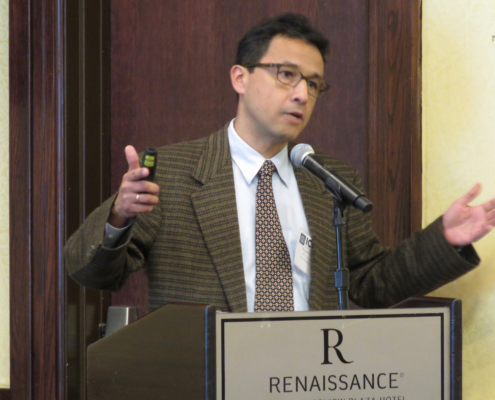 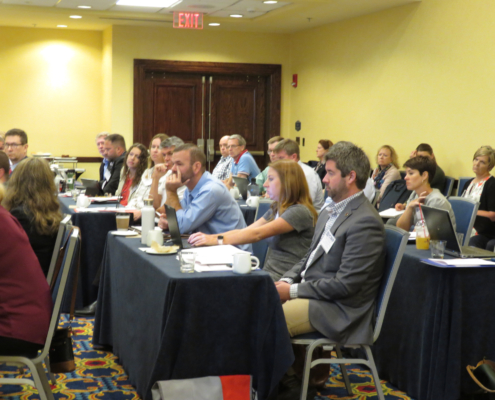 Please plan to join ICWP at their 2020 Annual Washington DC Roundtable on March 30-April 2, 2020 at the Crystal City Doubletree.  The meeting will be co-sponsored with the Western States Water Council and the National Water Supply Alliance.