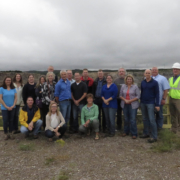 Heavy rain, tornado warnings and a flat tire could not dampen the enthusiasm generated by learning about the Arbuckle Simpson Aquifer Area.  On the bus ride south of Oklahoma City to Sulphur, OK, the Oklahoma Water Resources Board staff provided background information on what we would see during our stops at the Chickasaw National Recreation Area and the Dolese Brothers’ Aggregate Mining Operations quarry.  The aquifer underlies more than 500 square miles in south central OK and is the principal water source for approximately 39,000 people. 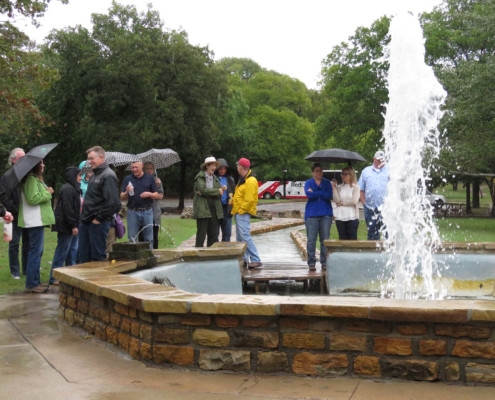 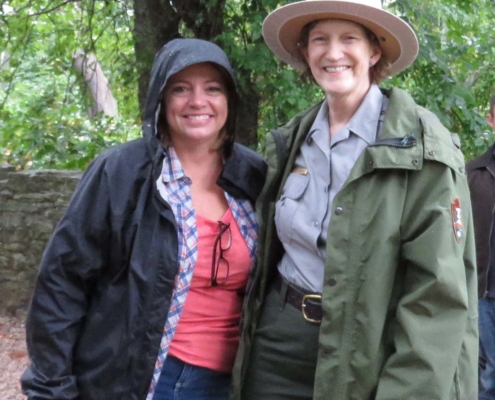 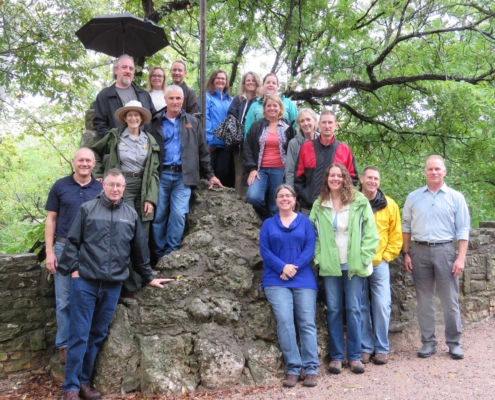 The Chickasaw National Recreation Area hosts about 3.4 million visitors each year.  During our stop at the NRA, we visited the Vendome Well and took a walk through the historical area.

Abundant and high-quality quarry products led the railroad construction companies to this area for raw materials prior to Oklahoma statehood.  The current quarry operators anticipate being able to work this permitted area for decades to come to serve the construction needs of Oklahoma City, southern Oklahoma and beyond. 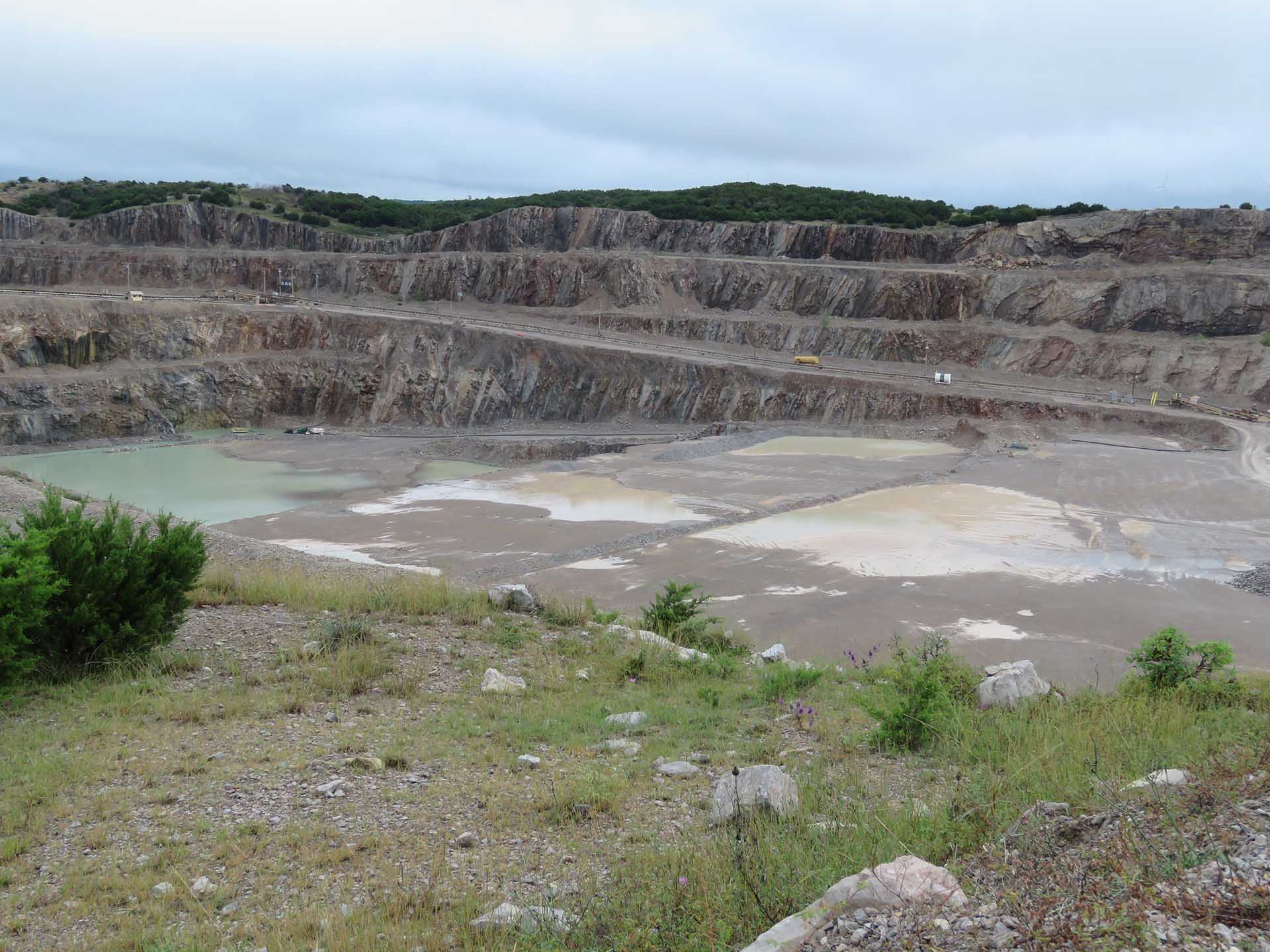 Welcome and Introductions, Julie Cunningham, ICWP Chair, Oklahoma Water Resources Board: Julie described the re-invigoration efforts over the past few months by the ICWP Board of Directors.  Sue Lowry was hired as the new Executive Director in February, 2018 and the Board held a productive Strategic Planning meeting in August.  A main focus of the planning meeting was making assignments to the 4 Standing Committees of the ICWP and to enlist members for the committees from the full membership.  Julie encouraged all to attend the Membership meeting on Thursday morning to learn more about these revitalizing efforts.

Elizabeth Ossowski-NOAA/National Integrated Drought Information System kicked off the first panel which focused on aspects of water supply.  She noted the 5 components of a Drought Early Warning System (DEWS) and 9 of these systems are up and running across the country.  NIDIS has plans underway to hold the next National Drought Forum in April or May of 2019. Dr. Kevin Kloesel-Director, Oklahoma Climate Survey noted that there are many perspectives on what constitutes a drought (meteorological, storage, soil moisture) and we as water managers need to think about who we are talking to (like legislators) and try and get the same understanding of your definition.  He described the Mesonet observation network that is in place in Oklahoma and how their expertise has been valuable in areas hit by extreme events such as hurricanes and flooding. Darion Mayhorn-US Bureau of Reclamation, Drought Program Coordinator described the emergency drought authorities given to the Bureau of Reclamation by the Drought Relief Act of a1991.  In 2015 this program was reformulated to allow the program to provide support across the country, not just to the 17 western states.  He welcomes inquiries from the non-western states to explore whether his program can provide technical assistance. Joe Gillman “Missouri Community Drought Response-State Role and Support”, Director, Missouri Geological Survey described the Phases of the Missouri Drought Plan, as well as the Governors Executive Order 18-05 directing state agencies in their support of local communities to prepare for drought operations. Greg Gates- “Baltimore Drought Response Plan” -Water Resources Practice Lead-Hazen and Sawyer showed interesting data on the predicted increase in number of droughts months across the country.  From a municipal supply planning standpoint, it’s important to understand the resources available. For instance, although New Mexico was in a substantial surface water deficient and reservoir levels were low, Albuquerque’s water supply impact was delayed due to their reliance on ground water supplies. 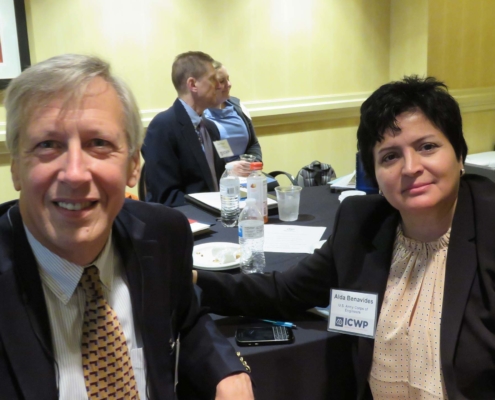 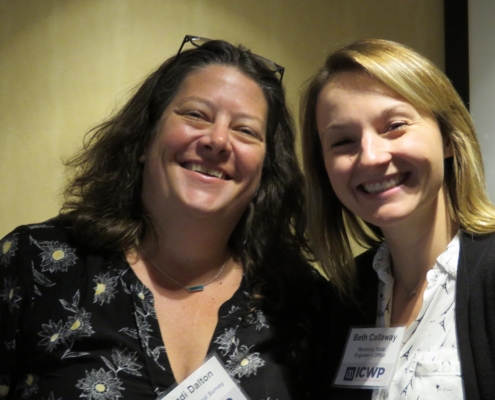 Beverly Hayes, USACE, Planning Assistance to States is the Program Manager for the PAS and Floodplain Management Services Programs for the USACE.  These programs are an avenue for the states to utilize USACE expertise and both programs are supportive, in that they are available for entities that have projects that fit the criteria, but the USACE is not out patrolling for projects for these programs.  She described which aspects of the programs were eligible for in-kind matches. John Coho, USACE Infrastructure Team described the President’s Legislative Outline for Rebuilding Infrastructure in America.  He discussed the Water Infrastructure Finance and Innovation Act (WIFIA) Loans as well s the Public Private Partnership policy. Streamlining of permitting process is also a part of the initiative.   Mindi Dalton, USGS, Water Availability and Use Science Programs Update described the assessments authorized by the SECURE Water Act and how the Water use and Water Availability aspects have progressed over the years since the passage of the SECURE Water Act.  Water use estimation at the daily HUC12, predicating for irrigation, Thermoelectric and Public supply is the goal. The planning team is currently discussing consumptive use assessments.

Jodee Pring-River Basin Planning Program, Wyoming Water Development Office described the history of 7 river basin plans covering the state of Wyoming and after 2 rounds of visiting each basin, the program took a different direction.  She describes some of the challenges of making the plan more pro-active, particularly with a staff of two. She is pleased that soon the StreamStats program from the USGS will be available for Wyoming. Heidi Moltz-Potomac River Basin Plan, Associate Director for Water Resources, Interstate Commission on the Potomac River Basin discussed the planning challenges that face an entity like the ICPRB as a non-regulatory body in developing their first comprehensive basin plan.  The basin states within the basin had their own plans, but the Commission’s wanted to take a different scale and different perspective than did the state water plans. Jennifer Hoggatt, Missouri State Water Plan Update, Missouri Department of Natural Resources discussed that in a state that has water resources of the magnitude of the Mississippi and the Missouri, that can skew the amount and concept of availability.  Part of their planning process is to get a better database and inventory of infrastructure and plans are to better integrate the state water plan and the state drought plan. Scott Kudlas-AWRA National Leadership Institute, Virginia DEP and AWRA Board of Directors described that the American Water Resources Association started NLI as they didn’t see a single place to go to find info on how to write a state water plan on learn from others.  They operate the NLI by invitation only and want to keep between 12 and 18 participants. This year downscaling climate tools, interstate commissions, water markets, keeping continuity in water plans are topics for the NLI in November in Baltimore.

Oklahoma City MAPs Capital Improvements Program— Celebrating 25 Years, Cynthia Reid, Vice-President of Marketing & Communications, Greater OKC Chamber; Water Planning History and Vision for OKC— Chris Browning, Utilities Director at City of Oklahoma City; Oklahoma’s Comprehensive Water Plan and Water for 2060 Initiative— Owen Mills, Oklahoma Water Resources Board—These three speakers provided a complete picture of the vision of the water related aspects of the MAPS development in OKC and economic benefits that are now being achieved.  The city recognized that the supply of the North Canadian River would not meet the needs of a growing city and Chris described several water development projects and plans by the City.  Lastly, Owen discussed Oklahoma’s Comprehensive Water Plan and their Water for 2060 Initiative. 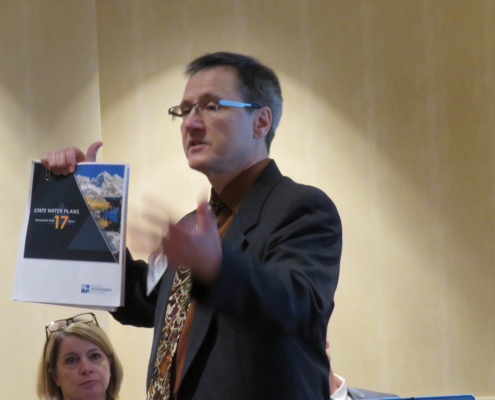 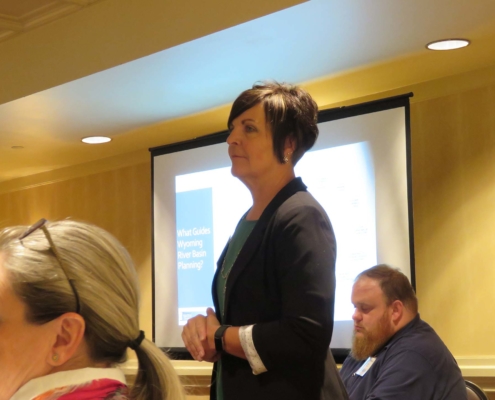 ICWP Annual Business Meeting –A separate set of minutes are available for this meeting.

Sara Larsen, Water Data Exchange (WaDE) Project Update, Western States Water Council emphasized the value of data exchanges and noted that now WaDE is just one of many that have been developed and are available.  The WSWC Water Information Management conference will be held at the EROS in April 2019. Brian Atkins, Division Chief, Office of Water Resources, Alabama Dept. of Economic and Community Affairs described Alabama’s experience in reviewing and selecting available water data management systems that would fit their needs of user reported data. Jim Schneider, Olsson Associates, Groundwater Evaluation Toolbox (GET) showed the wide variety of uses and audiences that their GET tool could be utilized for in showing the impacts of groundwater development or in other cases the impacts of non-use.  He discussed the benefits of a “containerized” model that is sitting in the cloud waiting to be run. 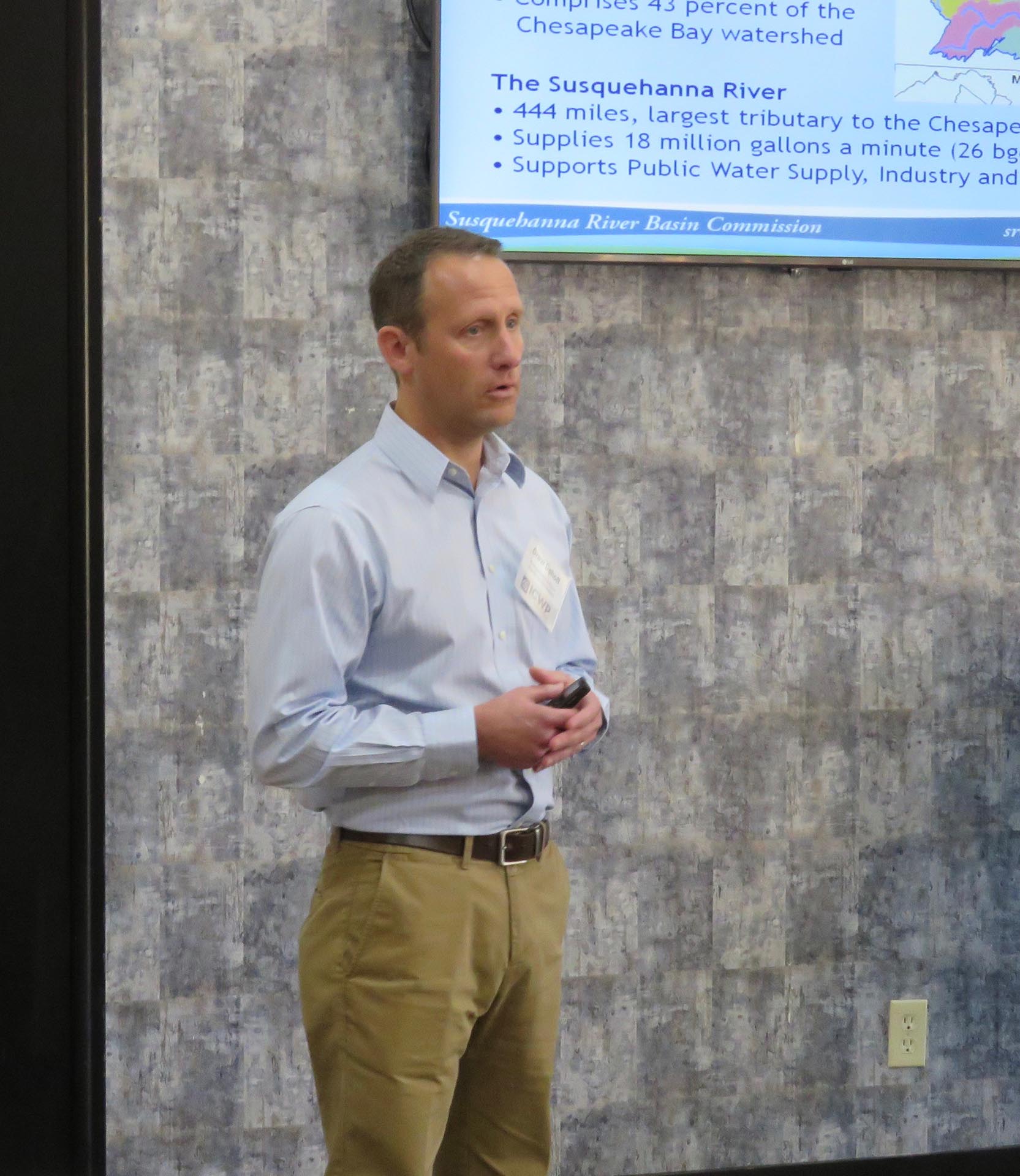 Drew Dehoff-Water Data Needs in Habitat Assessments-, Executive Director, Susquehanna River Basin Commission gave some background on the impact of natural gas development in the Susquehanna River basin.  As these impacts were occurring high in the water shed, they were interested in a cheaper way to look the ecological needs of that area of the basins.  The SRBC is collaborating with the Harrisburg University for Science and Technology to build machine learning that utilizes the large long-term water resources data sets from SRBC. 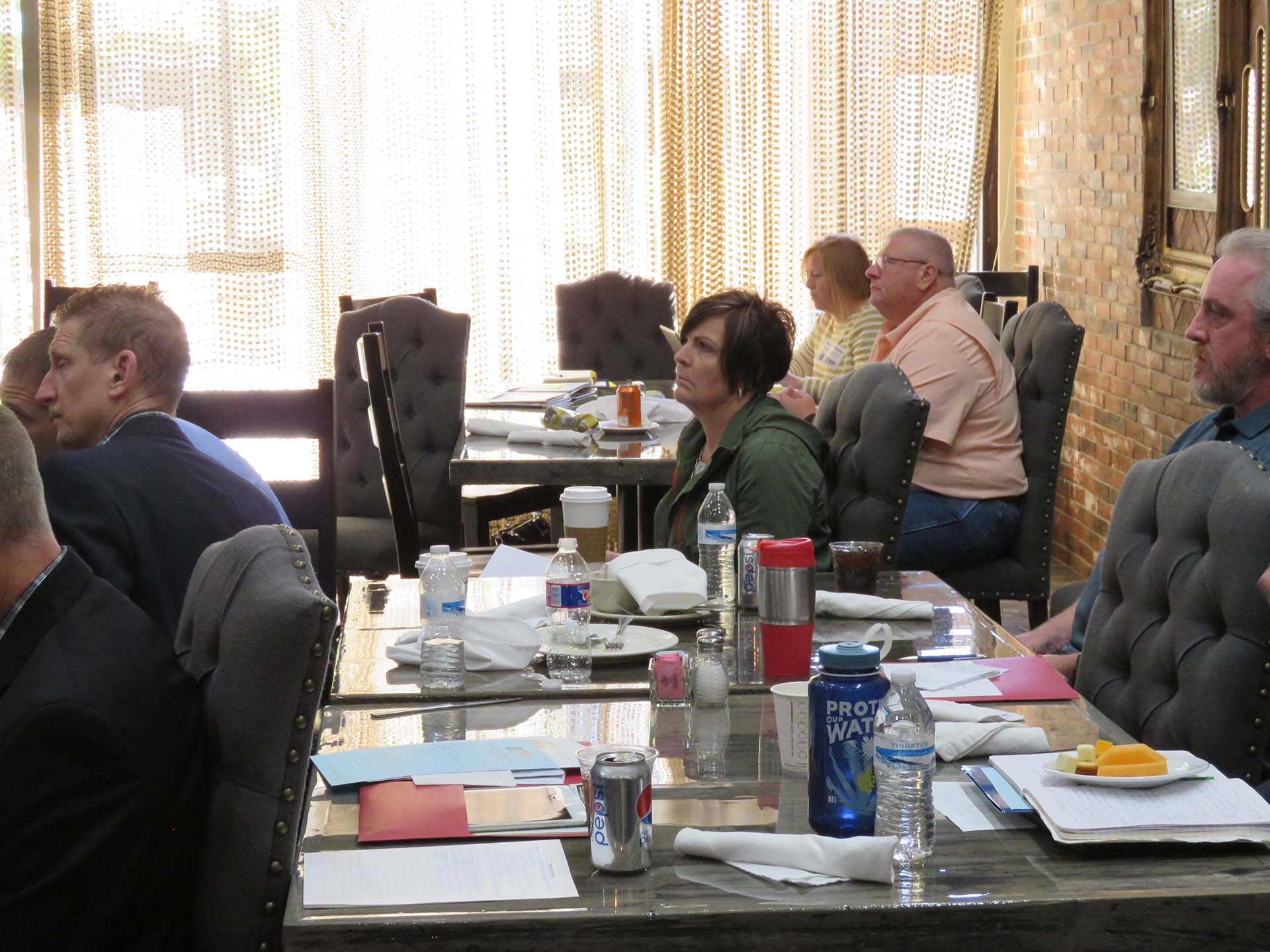 Molly Maupin, Lead, USGS Water Use Data and Research Program let the group know that she recently took over the lead position for WUDR.  She described the WUDR grants that have been available to and awarded to the states since FY15.  The Program Announcement for this year will hopefully be released soon. Ensuring that the water data use information collected by the states are in a format consistent with the protocols of the USGS.  Chad Wagner, Program Coordinator, USGS Groundwater and Streamflow Information Program gave background on the Next Generation Water Observation System which utilizes modeling advancements estimate the water supply and volume at other sites.  The Next Gen envisions outfitting 10 medium sized basins across the country with “super gages” that monitor a full suite of water, weather and water quality parameters.   A Congressional add to the USGS budget provided for the beginning of this work in the Delaware River basin.

Conclusion:  Newly elected Chair Brian Atkins thanked everyone for their attendance and wished everyone a safe journey home.  Please plan to join ICWP at their Washington Roundtable on April 2-4, 2019. 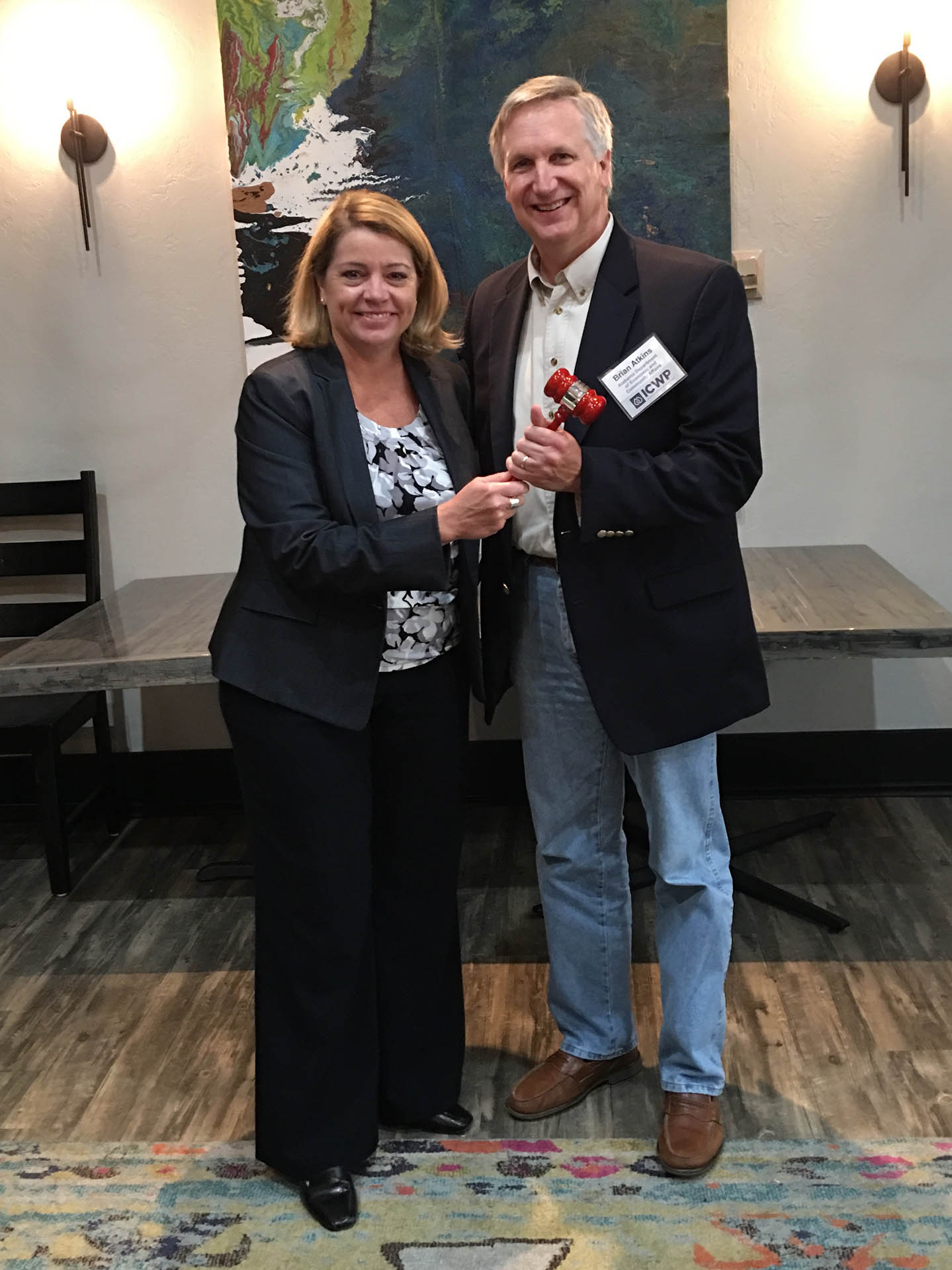